How to properly manage ssh keys for server access 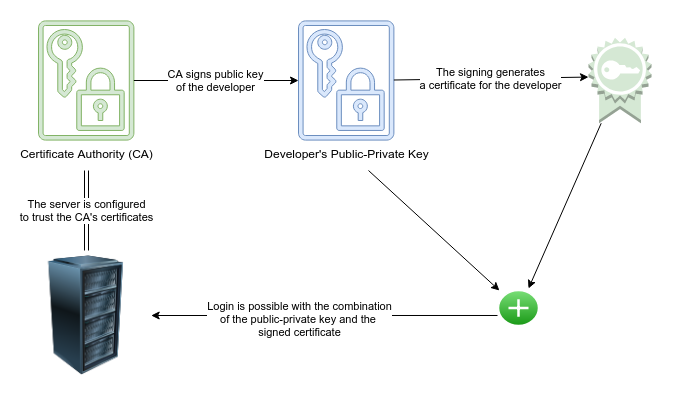 Every developer needs access to some servers for example to check the application logs.

So far so good. However, what happens when one developer leaves the company?

In that case, the public keys of that developer should be removed from all servers. This could be quite a bit of work depending on how many servers they had access to. And even worse, if it’s done manually, there is quite some risk that the key is still forgotten on some server, so the access remains open.

There are some commercial and open source solutions out there which want to help out with this problem. The basic idea is that you add and maintain the keys and the access lists on that service and when you remove a key, they will remove it from all your servers.

There were some great suggestions and insights from the community and the best solution to the problem seems to be the signing of keys which I will present to you here in detail.

I help you listen through the noise in machine learning:

The rough idea is this: You still generate a public-private key pair for each developer. However, you don’t upload the public keys to your servers.

Instead, you sign the public keys with a so-called certificate authority (CA) key which you generate before. This signing simply generates a third certificate file which you give back to the developer and they put it inside of their .ssh/ folder next to the private and public key.

When you sign a certificate, you can determine how long that signing is valid. So if you sign it with a validity of 3 months and the developer leaves the company, then after 3 months they won’t have access to any of the servers for sure.

Now you say: well, but I don’t want to sign keys of everyone every 3 months which is a fair point.

One possibility is to automate the process for example by building a service where a user can automatically get a signed certificate when they authorize with their company e-mail and password, but that is beyond the scope of this article.

The simple alternative is that you issue certificates that are valid longer and then if someone leaves the company, you can revoke the certificate, i.e. invalidate it. You can put a list of invalid certificates on your servers and they will not accept the user any more. This could for example be done by having this list on AWS S3 or some other storage and a cronjob on each server that regularly pulls this.

Show me how to do this

Glad that you asked!

It’s actually super simple once you know the drill.

First, you generate a certificate authority public-private key pair of which you should keep the private key very secure:

Then on your server you specify that all users signed by your CA are allowed to access the server:

Quick explanation for the different parts:

It will generate the certificate id_ecdsa-cert.pub which you can send to the developer and they put it into their ~/.ssh folder next to their public-private key pair.

It gets even better

Sounds cool, right? But you can do even better!

You probably have developers with different experience and different teams and roles and not everyone accessing the same servers.

So let’s add roles into the signing process!

That way, on the server you specify which roles are allowed to access the server and during the signing process you specify the roles of the developer you are signing.

Then, that developer can access all servers matching to their roles.

When you on board a new developer, you only need to generate that one certificate and boom they have access to all relevant servers without adding anything on those servers.

This is how you configure roles on a server:

Inside /etc/ssh/auth_principals/root you simply list all roles which should be able to login as root with one role per line:

Finally, configure on the server to use roles by again adding a line to /etc/ssh/sshd_config:

This is how you sign a key with roles (they are added to the certificate):

It’s the same as before, but with the -n ROLE1,ROLE2 flag. Important: there can’t be spaces between the comma for different roles!

Now, that developer could log onto any server where ROLE1 or ROLE2 are in an auth_principals file for a user name they try to login as.

Finally, if you want to invalidate a certificate, you can do that by the user name or the serial number of the certicate (-z flag). It’s recommended to make a list of generated certificates in an Excel spreadsheet or have a database depending on the number of your peeps.

This is when you already have a revoked-keys list and want to update it (-u flag). For the initial generation, use it without the update flag.

The list-to-revoke needs to consist of usernames (ids) or serial numbers (-z flag during generation) like this:

This would revoke access to the certificate with serial 1 and all certificates with id test.user.

To make the server respect revoked keys, you need to add the generated / updated revoked keys file to /etc/ssh/revoked-keys and configure it again in /etc/ssh/sshd_config:

Warning: make sure that the revoked-keys file is accessable and readable, otherwise you might lose access to your server

In my opinion, this solution is as good as it gets. You have the option to manage the access to your servers via ssh based on roles. You only need to configure your servers once (which roles are allowed to access it). For each new developer, you only need to generate a signed certificate and they immediately have access to all relevant machines matching their role / experience. And when they leave the company, you can revoke their access also in a simple way.

And even if a mishap occurs and a developer leaves without having their access revoked, their certificate will expire after some time, so they also lose access automatically.

For small teams, you can do these steps manually as they are very fast to do; then as you grow, you can automate the certificate signing with a login service based on company authentication details.


I help you listen through the noise in machine learning: